From Sierra Leone to South London 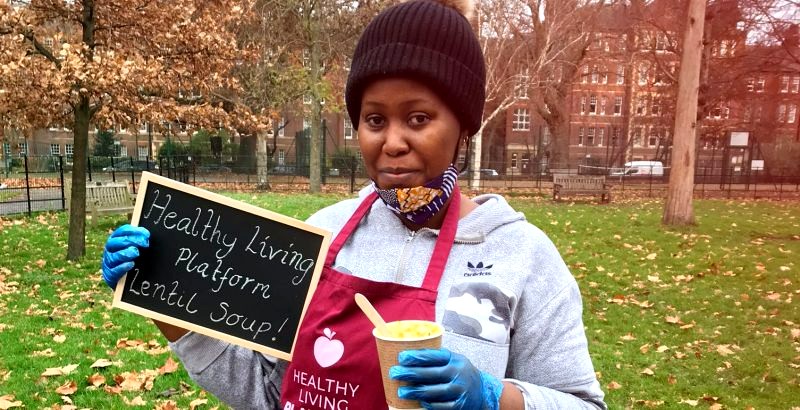 Isata came to the UK from Sierra Leone with her 3 young children in October 2020 where they joined her husband, who is registered disabled.

It was a difficult time to arrive and put down roots in a country where she knew barely anyone. She really struggled for the first couple of months, especially as her husband was unable to work because of his health.

Time to turn back?

Isata tells us she was almost ready to get on the plane back to Sierra Leone when, one day in December, while she was picking up her two eldest children from primary school, she saw a voucher and asked if she could take one. It was for food parcels, available from the community centre on the Southwyck Estate, Brixton, and free to any locals that needed them.

The weekly bag of fresh fruit, veg and other basics — provided by Healthy Living Platform (HLP) as a response to the Covid-19 pandemic — really helped get Isata and her family through those challenging times.

Looking up and cooking up

On one of her trips to the Southwyck centre, Isata saw a flyer promoting the Food Ambassador courses run by HLP and supported by LEAP (Lambeth Early Action Partnership).

When the scheme was explained to her, Isata’s eyes lit up. "I love cooking!" she says. The fact that it was free and child-friendly made it all the more appealing. She was accepted onto the six-week course and straight away learned to make meals for her family in a more economical and healthy way.

"Before, I cooked with a lot of oil," admitted Isata. "And I used Maggi stock cubes a lot, which are full of salt. Now I have cut right back on that, and I’m cutting down on meat and fish too, which saves me money. The teacher also introduced me to many vegetables I had not seen before."

The course was both useful and fun, and gave Isata the confidence she needed to help herself, and benefit her community too:

"I made lots of new friends. There were two women from Sierra Leone there so it was nice to speak with them, but I met and talked with other people I would never normally have come in contact with. The course also made me experiment more and think creatively about the food I already had at home. And it gave me leadership skills and the confidence to run my own sessions. When I first started the teacher said: 'Don’t try to do it all by yourself, you have to ask other people to help too' — and now I do that!"

Isata has been leading a number of ‘cultural cook-alongs’ where mums and their young babies come to cook, socialise, learn new dishes and enjoy the food together.

She and another Food Ambassador have just heard that their application to run another series of cook-alongs has been successful, so they are now planning how these sessions will run and how to recruit new members.

She hopes the skills and certifications she has earned will help her to find part-time work when her youngest child starts school and, eventually, she would like to return to Sierra Leone and "start a cafe that makes healthy food".

Isata was used to relying on a strong community spirit back home in west Africa. She lived in a compound where other family members would keep an eye on the children, and everyone would take part in the production of meals. Now she has found a little of the same communal spirit in a corner of south east London, and is paying it back by encouraging other parents to get involved too.

To find out more, please email info@healthylivingplatform.org or call Zoe, food co-ordinator on 07944 240420 for an informal chat.

Thanks for coming, was lovely to see and celebrate with you all! https://t.co/d0MbpznPWz